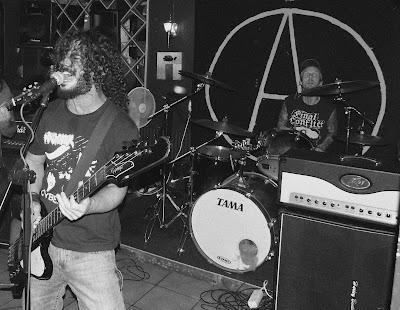 Remiso is a three piece act based in Malmo, Sweden but guess what: they don't play the typical Malmo crime city hardcore (Harda Tider Copyright). No, Remiso take their influences from the d-beat scandi 90's era plus some good old tech, bear-like german 80s thrash (or at least in my ears). They think they play raw punk but don't tell them they don't, please. They sing brazilian curses and they have swedish dreadlocks so you know if you like to mix your Bathory with some Anti-Cimex you are in the right place. Welle (bassist and vocalist of the band) was kind enough to sent me the link of their demo and i hope he'll sent me for free their upcoming full lenght LP. Also, check out the other band of the chilean guitarist Pato named Maligner who deliver fucking amazing thrash / death. I don't know if Klas (the drummer) has other band-projects but he has dreadlocks so i guess he has. This demo is full of good metallic riffs (as the opening riff of the song Violencia, maybe Slayer????) and two covers on Olho Seco and Ratos de Porao. Good stuff.