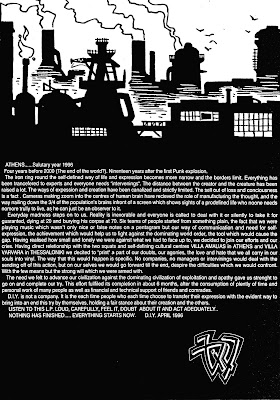 Once more i'm pausing the k-town series (don't worry, we have three more posts) to give you one of my all-time favourite albums, or compilations if you like. As you may already know i don't like any of my posts to have photos, but today is a special one. i think this album is a masterpiece that captures the energy of the greek scene of the 90's in a perfect way. Also you must know what the fuck some lunatic-punks used to say about the d.i.y hardcore punk before fourteen years. On your right you can see one of the inserts of this comp with thoughts (in english) about the d.i.y scene in greece back in the day. Before the usual music-talk i have to mention one of the more important things that this page says : "No companies, no managers or intervinings would deal with the sending off of this action...". I guess you already know my view on the topic "profit"! Please : read it carefully.

This comp.Lp released back in 1996 from the collaboration of the 6 bands that took part in it, alongside two occupied buildings - "social centres" : Villa amalias in athens and Villa varvara in thessaloniki. Here's propably the best bands of mid-90's in greece (sadly this comp does not include naytia and chaotic end - i think that they had already disbanded) with eleven ass-kicking diamonds. Every each-one band plays a unique style of their own that makes the listening provocative about what the fuck the next in line band will sound. All the lyrics are about social-political issues, the "scene" etc. This lp was also the first lp i ever bought (the same day i bought my first sony turntable also... so beautiful days - so energetic).

The bands that participated were :
MASTIGA :  (trans. infliction, plague) they played a combo of mid-tempo hardcore with some faster parts, double vocals and a lot of drum breaks.
SHIT HIT THE FAN : the only band that you can say it's not hardcore. a lot of melodies, fantastic riffs and expressive vocals. something like the petrograd of greece.
MIASMA : ass-kicking mid-tempo hardcore punk. excellent guitar works.
ANASA STAHTI : (ashen breath) from the ashes of Levelling, ashen breath took form adding the first vocalist of chaotic end. they played a hardcore heavily influeced from the late 80's, early 90's heavy-thrash metal scene with a lot of dark, gloom lyrics about society etc... their guitarist and main song/lyric writter created the band anatellon tromos (rising terror) in the late 90's.
PANIKOS : (panic) The first greek band that had samples and a "post-rock" touch, way before this genre becomes a trend... these two songs are more aggressive and a litlle bit faster than their usual... They only band that keeps playing nowadays.
PSYHOSI : (psychosis) If a band from greece we can say that is/was underestimated, this would definetely be psychosis... Heavy, distorted guitars, heavy, distorted bass, mid-tempo drum hitting and amazing vocals with much more amazing lyrics. When i was a liitle kid i used to call them greek Amebix but the band has it's own mark and it's so fucking great. maybe my favourite band from the comp. their bassist/ singer know plays for the "anti-seller", post-rock band Incognita sperans.

If you want infos about greek bands etc you can check the blogs : crustcracker, 7inchcrust, crust-demos
and punk.gr
Last, but not least : this rip isn't mine.
Enjoy and leave comments to tell me if you like it...
Heads Up :
I have made a mistake : when you download this album the folder says "disruption of public peace"
Change the word public with the word domestic!

Is there really anything more that needs to be said about this record? I don't think so. It is one of the most important records (if not the most important) of the greek punk/hc/diy scene. Every track is unique and the artwork is great.

This record depicts perfectly the scene at the mid-90's!

Perfect upload, thanks for posting!