This post - to be honest - was a huge fuck-off to the neo-trend band Kriegshog. Not that i have something to say about the band itself, but i have to criticize the hole "KVLT" thing that surrounds them. Kriegshog recently released a good - indeed - album on La vida es en mus records (spain) and H:G fact. The press made in japan and sent to europe overseas, so the guy from la vida had to pay extra taxes for the vinyls. The price of the lp is close to 19 euros (if you're lucky and have the privilege to afford to pay for 25 copies). So, why a god-damn lp of a diy band costs 20 fucking euros (in usa will cost close to 35 dollars!!!!!!!). And why all the guys go on and pay 20 fucking euros to buy a god-damn album. Is this punk? Are we so privileged nowadays? I ask that, knowing that the first press of the lp is sold-out. I don't know, i can't understand. Why do you pay 20 euros? Because they are japanese, they have distorted guitars, they make very intense shows, they have black and white covers, cool song-titles and because they are japanese. Oh, i told that already. They have plenty of elements to be the new cult. Fucking hipsters, i say. The album is good but not for 20 euros for sure (HELLOOOOO, it's a punk record). And for sure you ain't gonna see that album posted here!

So, I asked d. (black trinity / go filth go) to make a review about a very good band - that is not so trendy - called Isterismo. They are also from japan, they play distorted hardcore punk and as Tomorrow they are influenced from the late '80s - early '90s italian hardcore scene. They have released also a split tape with D-Clone and have been part of two great compilations called "Hard Core Inferno" (2010) and "Yotsuva" (2009). Both comps will be posted here in the next months. So, pay attention to d. : 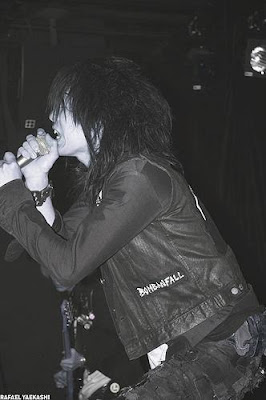 Aaaaaarrggghhh!!! This is japanoize to the fuckin’ bone!!!
The name of this band describes perfectly what they are all about:
Hysterical japanese raw noise hardcore punk!
I first checked out Isterismo on their split tape with D-Clone on which both bands were absolutely insane! Here it’s the same.
Ultra raw, ultra distorted guitar sound, massive drum beating and frenzy vocals! Also a LOT of energy! Makes you wanna crush things! All the titles are in italian (?!). I guess they were listening to a lot of Wretched when they wrote them! But the title means “Can’t suppress my conflict” or something like that, which I like.
This EP (that lasts less than 7 minutes) is a shot of nitroglycerin!
Swallow and die!!!

Yeah that stuff with Kriegshog is crazy.But Isterismo 7" is the same,but its not even good as Kriegshog,very hyped band.I mean just because you ripoff wretched logo and sing in italian that doesnt make a good band,i think that even Tomorrow is much better band than (H)I(P)sterismo.

are they hype?
none of my friends know them...
fuck, do i have to delete the post?

i thought they were not so well-known...i guess it's all the same with the japanese. too much attention for nothing

Well basically every band that release stuff on Overthrow records sell their records in like few days,because its very limited and then you can buy it only on ebay.Sad thing is that there's second press of this Isterismo 7" available in japanese distros for regular price but i still noticed that people pay like 20-30 dollars on ebay for same second press.
I listened to that stuff few times,i even tried to like it but i cant! haha :D
Talking about newish japanese bands,i liked Krossa 7".

hey milan
i agree with you absolutely...

the next VA that i'll post have some krossa tracks...

thanx for the comments man

Sorry I am calling bullshit on all this.

"Hype", "hipster" and "trendy" are not by no means useful (or realistic!) terms when it comes to noisy hardcore (like Isterismo or Kriegshog).

I am tempted to say that the bands and genres that are "hyped" are more like bands that play some sort of US HC - MRR usually covers bands like that, as do countless A4-format well-written hardcore fanzines from predominately the US or Australia. But even bands or genres like that are hardly "trendy" because lets be realistic - how many people listen to hardcore punk in 2010? Even the most popular bands in hardcore are obscure (unless you live in some sort of hardcore vaccuum and is unable to see reality).

The economics of "hyped" bands (typically Japanese) is more illustrative of the fact that there are more than 300 people in the world that like this type of hardcore. The Kriegshog LP came out very expensive which was unfortunate, but as you acknowledge that was down to logistics, not choice. That people go on to buy the record anyway is does not prove that they or the band is hyped.

Besides I though "kvlt" was something that was used for metal or doom metal whatever.

Do you think that people would pay 25-30 dollars for lets say that new Voco protesta LP,even with same package as Kriegshog lp ? And sell out color version in like 3 minutes? :D

if the question is for me to answer...no, i don't think so...even if voco protesta totally kicks ass...but again my opinion is that you-do-not-pay 25 fucking euros for a lp...nough said

Slobodan, you're missing the point entirely. Anyone knows that Japanese bands in general are hyped to fuck. GISM, Gauze, Disclose, Gloom, SDS, Framtid being the most overrated (I'm sure I've missed some).

The hype surrounding bands like Kriegshog comes from all the elitists who are trying to distance themselves from people who have just discovered Bastard and Death Side. The amount of attention I've seen given to bands like D-clone and Zyanose is ridiculous and a lot of it comes from you so it's no surprise that you're here trying to defend yourself.

..I thoroughly agree with the points made by "bobok"..SB you put yourself about so much that you are a cartoon..learn to shut your mouth for once in a a while..- the rest of us can find our own music you know without you leading the evangelical way to the the brave new worlds..
Remember to know it is to have it, ..and the rest is simply showing off.

Essentially, when you use any platform that you have control over(fanzine,blog,etc) to advertise, over-enthusiastically talk-up, blatantly promote, or just tell the world how much you like a particular demo/track/7"/LP or band, what you are doing is attempting to gain kudos by association, by drawing your self ever closer to that band by increasing the distance away from that band that others have. It is an extension of ego, and an insult to others.
Can you not simply enjoy a band to yourself, without trying to draw around you all possible inferences that an ever closer assimilation with that band may bring ?
Similarly, all that a band t-shirt is, is you trying to associate yourself with any and all associations that that particular band has. Its a stupidly blatant as a t-shirt saying "coca cola" or "Ford Cars", but your own bourgoise deviationism prevents you from seeing your own maleability into self absorpbtion .

Kreigshog LP was an costly joke at your expense if you bought it.
Hyped by those with vested interests and bought by those who want the association that that particular band/release brings.
Wave after wave after wave of hype that we are all getting ever closer to punk perfection that we all must buy into, or be left behind with yesterdays promises, and away from the heat..
Hype/wilful association/fashion/product/consume - sound familiar ?

You may not like it , but punk records mean nothing except the associations within your head. And if you are subject to the usual human frailties then you too will be swept along with images/products/trends that make the next band you think are so important exactly the same as a teenage girls utterly important new lipstick colour.

Punk is a joke that we all like to run along to - but how much of a mainstream idiot is it making you ?