World burns to death (What do you, still, seek to know?)

Mike has been expecting this review for about a month (or maybe three months, bill?), so i can guess the look on his face when he reads these words. My apologies Mike, but better late than sorry!!!!...to the point now:

World Burns to Death. Fuck! A band that continues to surprise me with their 7'' releases. It's not that their LP's are bad, it's just that their 7'' are so fucking ''knife to the bone'' that without wanting it, you let their 12 inchers aside. 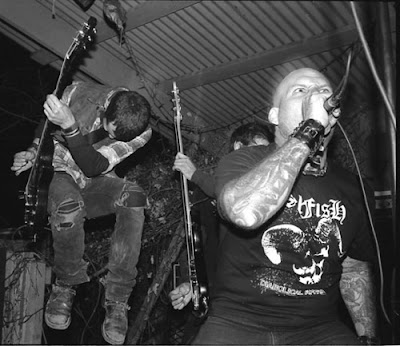 "So welcome home heroes to a sea
of "made in china" U.S. flags
Ceremonial burial shrouds
For these, your honorable dead"

I'm referring to the split 7''s with Japans Slang and Blowback, as well as (actually ESPECIALLY) the ''The War Can Go On Forever'' 7''. The band seems tighter, faster and more ferocious than ever before. Imagine ''the Graveyard of Utopia'' era songs, blown out to total punk chaos hymns. Like a 10 ton bulldozer building up speed, the songs just grow and grow and grow, eating up everything. These new 7'' also celebrate the inglorious return of that echoing effect on the guitar leads I was missing since ''No Dawn Comes...Night Without End'' 7'' and the split with Sick Terror (NEVERENDING WAR...what a song!)...all hail that echoing effect!!

Actually I've been listening to the World Burns to Death sides so intensively (almost like some drug overdose religious ceremony...) I haven't gotten to the Japs yet...no kidding...
I'll leave a comment though when I get to them!

World Burns To Death - The War Can Go On Forever EP

World burns to death - splits with Blowback and Slang

(some rips are stolen from fugitive equilibrium)
Posted by mikxxx at 21:36

both 7"s shred, i didn't expect 'em to be such great releases. maybe their best recordings on seven inches

and i say both cos i didn't listen to WB2D/Slang yet,so thanks for posting it :)

what more can you expect with a guy singing with nails in his tongue while wearing a selfish shirt...
now, i have to agree with dbill 'coz i had a very bad opinion about wb2d (as Severed head of state also) and the guys tends to change my opinion...the 7'' the war can go on...is maybe the best 7'' i have heard lately and shows that the band still works in progress...also great lyrics

freedom of speech but not after speech...acid in the face of human rights

always liked these guys, thanks for this.