Some days ago V. (drummer of Beginning of the end) sent me a review of blackpunk'n'roll's masterpiece "berlin is burning". I'm so excited that guys get themselves into troubles for the blog (or just waste their time...). The only thing i'll add is that Midnight is the best blackened punk band nowadays, playing live shows wearing full-faces and leather jackets while their guitarist used to play for Annihilation time, Satanic threat and Nunslaughter.
Kick it off, V. : 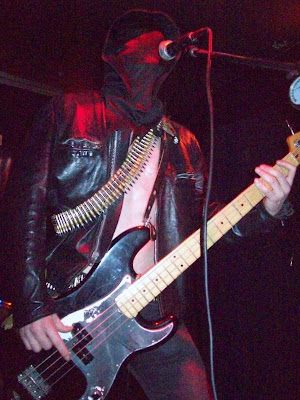 "Here we have Midnight, a real black and roll juggernaut.
They come from Cleveland,Ohio and formed in 2003.
This release is a compilation, that contains the 2003 and 2004 demos, along with one new song.

I've been listening to this band some months now and I can say for sure that we are talking about an extra-spectacular Motorhead-meets-Hellhammer Worshiping Band.
They will unleash hell upon your place from the moment you will push the play button and the sound will come out of your speakers.

The production is a little lo-fi, cause most of these songs are demos, but gets the job done in an excellent way and it really adds up to their occult aesthetic. You can still hear everything and at the same time you get what is good about old-school blackened speed metal.
It will shake you hard!

Now to the tracks, "Berlin is burning"  is the master of the game, great riffage great solos and a catchy chorus.
Personally I liked a lot "hot graves", with its uptempo feeling
and "long live death" with its slow muddy groove.Also the D-beat qualities of "Turn up the Hell" can't go unnoticed.

haa!
To vales telika!
Pww re paikth!
Na sai kala!
It is an honour indeed!

haha
thanx chris...
any recommendations from your hometown area?

guitarist also played in Puncture Wound and Gordon Solie Motherfuckers. he is currently playing Bass in Inmates and Flying Treccechos. Drummer has played in Ringworm, Cider, Integrity, The Darvocets, and Terminal Lovers. Athenar (voice & bass for Midnight) IS Midnight. all studio recordings are all insturments played by him, with occasional guitar solos played by Mark or The Chan (both ex-Boulder)

... and wedege...
mate. you were the drummer of Gordon sollie motherfuckers...?
correct?
great band, i may do a post about you/them