I don't know why i really post this 12'' that is already everywhere on the net. Reviews, downloads, merch etc. I may owe this to myself. I have been raised as a crustypunk (not an a exception to the majority of crusties) with music influences like Hiatus, Doom, Active minds, Detestation, Positive/Negative and Amebix. As far as i'm concerned Amebix was not the creators of a new genre or playing-quality masterminds. No, for me amebix was that. Was the fire that burned slowly in the dark, the most hateful word from the most ugly tongue. Amebix was IT. 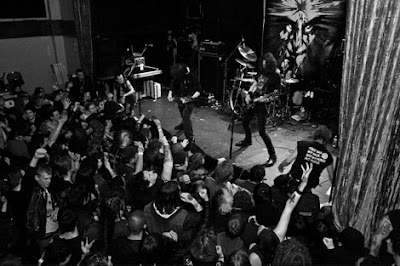 After 23 years (notice that their last album "monolith" was released in '87) the 2/3 of the original line-up decided to re-record some already classics as a first taste to an upcoming proper album with brand new songs. Rob "The Baron" Miller and his brother Stig joined up with new drummer Roy Mayorga (who is also the producer/recorder of this 12'' while the mastering was made by rodney Mills). Also roy mayorga was a member of Stone Sour and Soulfly and this is really strange for Amebix to hire a professional drummer, but let's not forget that Mayorga got his start with Nausea, who – along with Amebix – are probably amongst the top five most noted bands associated with the "crust punk" genre. When i first heard that, i had a reaction like many other guys (i guess) : "you are amebix, why you have to do that. You are not Judas priest, you don't need it". Even if i don't have the answer on that question yet, i have to admit that this ep (12'' on 45rpm to be more specific) is a fucking killer.

Two days now and i can't put it off my stereo. For those who can afford to listen every part of the Amebix's legacy, metal-one and punk-one as a friend once stated : if you want to know if a guy is a punk or a metal-head you should ask him what album does he prefers. Arise or monolith? If he say arise he is a punk, if he says monolith he is a fucking metalhead. Even if i prefer monolith, this ep makes a good work overall and you have to check it out, especially if you don't like the re-record shit - it might change your opinion.

First track is the best amebix track ever (for me) : Arise.
The recording is great making the guitars so fucking sharp, the bass is heavy but wellheard while the great tupa-tupa of the new drummer is awesome. The voice of The Baron has become by the years a little bit "broken" and sounding like a demonic-witch spelling some real bad curses ("The Baron's voice is bound to be compared to Lemmy's growl. But, where Lemmy seems to perpetually have a wad of mucous and glass spinning in his throat, The Baron spits the bile out, letting his inflection twist and churn as it crawls into your ears"). Especially the voice gives the whole recording an Evil touch, especially when baron "sings" :
"We will set out with a fire in our hearts
When this darkness gives way to the dawn
In the light we're united as one
For the kingdom of heaven must be taken by storm!
ARISE! GET OFF YOUR KNEES!"

Second track is winter (released in 1983 as a 7'') :
Best re-recording of this session. If the original one was simple haunting this one is apocalyptic. The tight sound had made it a truelly war theme, a fucking hymn. Trumpets of death and the four horsemen of the apocalypse in the northern part of nowhere:
"This is the season of the fire, this is when the reaper crawls.
Feed the flames and make them higher.
No sanctuary behind four walls.
Red sky at night, the shepherds delight but nothing left by the morning.
WINTER"

Third one and last track is Chain reaction.
a song that has been sang from so many mouths. Has been a logo and briefly a state of mind. I can say that is the only not so powerful track of this session. They put on it a lot of synths that made it more atmospheric.
"We swear allegiance to none.
Be not become
There is no one upon whom praise we will shower
I believe that the sin,
Is the first to give in
On the path towards the ultimate power"

Telling tales round the bonfire at night!
Posted by mikxxx at 18:01

this is "a fucking killer" only if you approach music in the consumerist-idolizing way of a metalhead.

Other than that, it's just a rip-off, I guess they wanted something to supplement the crusty patch they've been selling in stores.

yeah, i have seen that patch (i don't owe the record) and i guess more or less new kids will stick it on their jacket..
apart from that i liked the record but i understand your opinion about rip-off and i agree in a way...
profane existence sucks these days really hard...