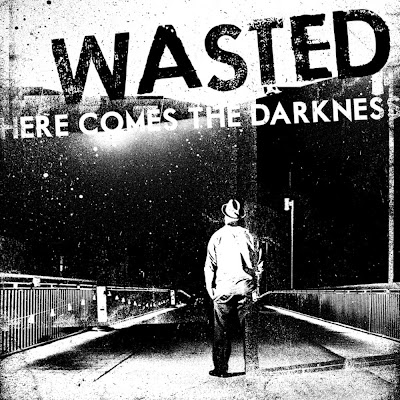 Wasted is a punk rock quartet who form in Joensuu, Finland back in 1996 and this is their latest album released some days ago from Combat Rock Industry (a label that i never seemed to get along with - the only album i've ever buyed from them is "Killer" from VICTIMS). In their sixth album Wasted delivers once again great old-school punk rock much influenced from bands such as The Clash, The Adolescents, The Wipers etc. If you liked their previous album "Outsider by choice" i think you'll fall in love with this one because all the great stuff which made Wasted so famous among the punk-rockers all over the globe are here present too. Easy to learn choruses, guitar riffs that goes in your head like a nail in a coffin while you're trying to catch the melody from one of the songs going through your walk in the morning and a moody feeling above the whole lyrics, resumes the intensity of the band's live performaces with exausted crowds and endless sing-alongs. The album contains 10 tracks and all can be described as "radio-edit hits". You're maybe know my love for old-school stuff and this album made it in my picks for "the album of the year", plus if you call yourself a dj you owe to your friends always playing "Death Bells" and let them hit you in the face.

Hey, Being waiting for a new post!
Check out my new blog, thanks!
http://zerotosuicidal.blogspot.com/

Not sure. Do a post of some cool band that you don´t see often on blogs :).
Btw, I´ve added you on my blog list.

hi!!!
we are venganza, a iberic hc punk band from Zaragoza (xpain) and this is the link for our new EP.

Thank you so much!Maybe someone want find a similar samples to these tracks, i left link here - www.lucidsamples.com