Down in Flames - Discography

Two years ago, I’ve made a post about Down in flames. I think it's time to write about this band again. Down in Flames was a hardcore punk band from New Jersey that have released some of my favorite hardcore tunes. Blistering, mean and powerful short tracks with yelling vocals from four kids, i mean kids. Checking some photos from the band's live appearances i saw that these guys must have been in high-school when their first 7'' released. 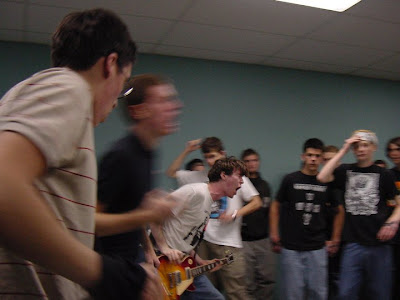 Last two days, i can't stop listening to that fast US hardcore from the late '90s / early 00's. Deathreat, Tear it up, Sleeper cell (i uploaded a new rip - check here), a lot of Out Cold (once more), Last in line and the likes. And then i just saw that someone created a bandcamp for Down in Flames and thought "fuck yes, I’ll do a new post". I still remember the first time i gave a spin to the self titled LP and I was so unprepared for what i was listening to. Heavy, in your face, sometimes like screaming at a wall. So energetic that i couldn't deal with it. Still today this is one of my favorite hardcore records (check for example "waging a war"). So, i uploaded their whole discography again, on 320kbp rip this time and started to mosh my house's walls. Here we have 37 tracks of ultimate negativity. No childhood, no happy family, no good friends and aunts with great gifts and sunshine holding your beloved girl's hand. No, this is not My Turn. This is DOWN IN FLAMES. Lyrics are bitter and sound like the soundtrack of a ruined life in my ears. If you're into fast pumping non-stopping hardcore ejaculation and you like bands like Die Kreuzen, The Gate Crashers, Hero dishonest, Think i care, Life's Halt, What happens next?, Career Suicide and you don't know these bastards, you have to pay some attention. The band have released records with labels such as Broken Glass records, 625 thrashcore, Coalition records and Gloom records. Some of the band's members have been involved with THE RITES (i think) and Another social disease.


"My acceptance was followed by the warm touch of my own palm
looking in the mirror i ask myself
Is this all that life has to offer?
i fucking hope it's not"

Labels : Down in flames, Hardcore, usa

Does your rip have song titles included?

No, this is not MY TURN.
This is DOWN IN FLAMES.

yes vhris
all songs have titles

Guitarist was in Tear It Up as well.

could you reupload this please? i need this band in my life again

go get it from band's camp, it's free
http://downinflames.bandcamp.com/album/discography