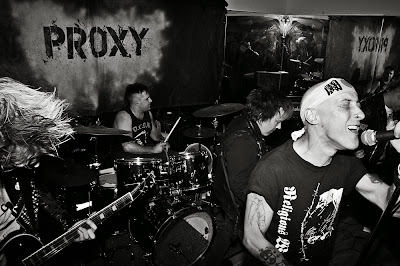 Sometimes it's so hard to find the correct words to describe something, a feeling, a movie or even a song and some of these times is happening right now as i'm writing this boring words trying to make 'em something worth paying attention to it. And still, i can't find the proper words. As my pal D. did a brilliant review for a "blog" about Proxy's first album "Something we've all seen before" i've chosen to review the band's latest - the third - release called "Police car". The self titled track have been also part of the mind-blowing first demo of the band two years ago and i have to confess the demo's version was more raw and ugly than this one. The band i think tried to put out a 7'' full of rock'n'roll influences blending the ultra powerfull UK82 style ala Blitz (first era), Varukers or/and GBH (and a little bit of Infa-Riot??? listen the track "Schackled to a corpse" from their 12'' and you'll see) with heavily Motorhead influenced parts and as a result this release tends to by more "funny" and ass-kicking in a good way. "Fountain of Youth" is my favourite track and you can think of me pogo-ing my self while yelling WE DON'T GIVE A SHIT, ANYWAY. Too many good albums and seveninches lately guys, and i can't afford to buy them all, so now you know what i want for a gift for my birthaday. Released by DiscosMMM, go grab it.