Selfish & Liberate - split - The only thing between life and death ... is you

Let's get once more, "back in the day". It was propably 2001 or 2002 when alex from hibernation sent me a bag of cool stuff. Detestation's "the inhuman condition" 7'', Cavity's "Fuck diablo" 7'' and this masterpiece split between two of the greatest japcore bands of the planet... I couldn't find it ripped anywhere, that's why i rip it. Since i can't trace it anywhere and as it was a request of buddy 7inchcrust here we go...

This 7'' has been released from H:G fact records (H:G fact-111 release) in japan and contains 4 songs of ultimate destruction...Songs to drink beers, songs to cry, songs to wake-up from hangover or songs to stare at birds (Liberate's "need the power..."). Also, Sugi's artwork is amazing and propably one of the best drawings the dude ever done. 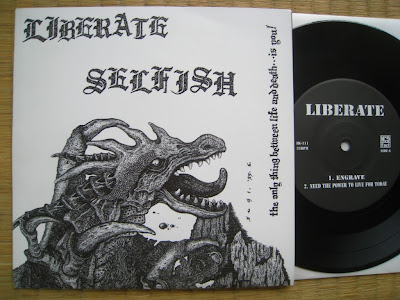 On a-side we have Liberate from Tokyo, japan and the only think i know about them is that they are ex-members of ACID and Macrofarge and pre-members of Crossface.
Now, the sound is thick, modern japcore with great metallic riffs and crazy vocals like a dog barging before the bite. the japanese motherland has the tendency to offerr us... thanx for that... (and the bassist is Kawagutsi that i can not recall...other bands maybe?)

Selfish on the other side, is more or less well-known as one of the best japcore bands outside japan (alongside Burial). They started as a crustcore band with uk influences and soon change their sound to japanese hardcore. This is the first 7'' with the usual solid japanese sound. Tight ass maybe is the most ugly and sing-along song Selfish ever wrote and has a secret magic power to make you wanna do harakiri..Yeah right, and you know something... Chelsea (from Death side and Paintbox) do the guitar-solos here... The grave is open, go on and hide... Last chance.

Never gonna lose it
Posted by mikxxx at 16:02

thanx billy gor you comments (as your self and as your blog. lol)

NO BEAST SO FIERCE said...

Great post!!!
Also, just got that Delta split ya posted ,but payed thirty bucks for it. Then I saw ya had it up here. Where did ya get yours??
Hope all is well in Greece
Cheers
Sean
NBSF

yeah, milan this 7'' comes from another age...killer tracks all of them...