Zegota also known as the "Konrad Zegota Committee",was a codename for the Polish Council to Aid Jews (Polish: Rada Pomocy Zydom), an underground organization of Polish resistance in German-occupied Poland from 1942 to 1945.
The Council to Aid Jews operated under the auspices of the Polish Government in Exile through the Government Delegation for Poland, in Warsaw. Zegota's express purpose was to aid the country's Jews and find places of safety for them in occupied Poland. Poland was the only country in occupied Europe where there existed such a dedicated secret organization. 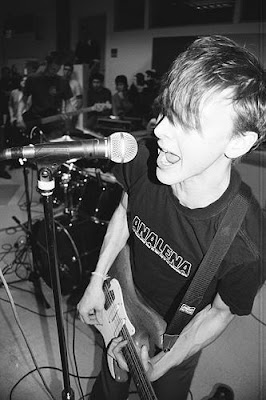 Now, Zegota is (was?) an international conspiracy - members of the band lives in sweden, usa etc - of four great musicians and political aware individuals. They have released one seveninch and three full lenght albums. Reclaim was released in 2006 and it's their last record

We can say that this album is a little bit experimental, has a lot of tempo changes, some cariibbean percussion, some noisy parts reminds me mainly the european screamo scene of the 90's. The lyrics have that strong political message well-hiden to some self-destroying lyrics, screams against the cops and the capitalist system dressed with great cutting-up drums and sickening guitars (the strange thing is that the guitars have not so much distortion but you get a weird feeling, trust me). If you seeking a reason to cut your veins tracks like "never trust a cop" or "struck by the wild"  i think it's the right one. So much depression.

Also one guitarist has been session guitarist for Catharsis, that's why we have a strong connection between zegota and the great CrimeThink records. Also, interesting is the way zegota organize their own gigs or set-up gigs for other bands 'coz they use the "free-entrance" system (ελευθερη συνεισφορα το λεμε εδω αν και καποιοι φαινεται οτι το εχουν ξεχασει...). A very good release that comes in recycled paper so order a copy from crimethink and dance in the rain while you're crying.

i have the st 7" (recycled paper too and nice cover),i love Nina Simone's Sinnerman played with respect and spirit.
Never trust a cop:
http://www.youtube.com/watch?v=RNXPxt6T5i8

I've been listening to this for a couple days now. Thanks for uploading.

the pleasure is all mine, thanx for the comment