Some days ago i reached the little social centre called pikrodafni, in a suburb of athens to watch La casa fantom. The gig was among friends, via mouth to mouth communication - no posters, internet etc. The 50 bastards that saw the norwegians i can say that were more than lucky if i can judge from the smiling faces right after the gig. A 30 minutes set with a drummer that stands for 10 drummers together, and a rythm bassist with great voice. As my shirt was completely stinky sweat i knew that i have to make a post for La Casa Fantom.

La casa fantom started back in 2000, when two friends - Lars and Bard - start to jamming in the livingroom of their collective outside the city of Oslo. Staying in the forest of oslo, eating from the garbage of the "civilized" society (the band has a track that means "dumbstep diving"), using amps that they found'em among trashes and fixing 'em by themselves i dare to say that these guys have made their own big refusals against modern society normes and capitalist system. 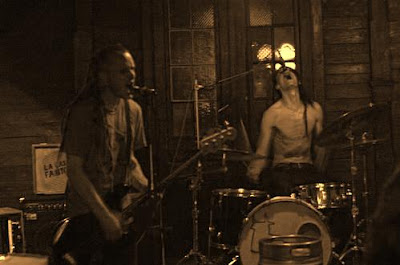 "Our name comes from a do it yourself wine kit which gives you 20 liter of redwine in 24 hours. It was just like our music, fast & dirty with a lot of nerves."

The band has already released two lp's (including Fredlos) and a bunch of 7inches, in their own label Iskrem Plater records (means icecream records) and all of them are great. This lp starts with a great simple intro with a little bit pessimistic lyrics to continue with a death-hymn full of blast beats and broken voices. These guys mixing so fucking good melancholic atmoshferes with crust, black metal (Norwegians, remember?) with grindcore. Jazzy grindcore (or post-crust) would be the most accurate description for the band's sound, as a friend told me in the show and i have to agree with him. Lars, the drummer, also palys in the sludge-hardcore band Hombre malo that features members from Ictus and This thing called dying.

You just need a drumkit with an octapus instead of a drummer, two voices that spitting venom, a bass with plenty of pedals with a dreadlock guy for the arms and... who the fuck needs guitars?

If you are familiar with this type of experimental noise, i'm sure you'll love La casa fantom. Give it a listen, in this rainy and numb day it's the perfect soundtrack.

I don't go to shows much these days, so I will just live the chaos through you! I've loved this band for upwards of three years now, and I probably will never see them. Boo-hoo for me. But, man, what a great band. Their use of bass chords and distortion... whoa.

nice band,Whispy my blog mate told me about them long time ago but never gave them a listening before.thanks Mike

I like bands like this which sounds originally and different..
have some mp3s from them but not this record,so thanx on that!..

@ Batguano - if you like distorted sound of bass you should check out Nulla Osta,great crust band with two distorted bass and no guitars..
http://www.myspace.com/nullaostapula

I met Lars (very cool guy, and impressive drummer) when I setted up the Hombre Malo show in paris: he gave me a La Casa Fantom record, but I had totally forgotten about it until then... thx to you for reminding me, sorry to Lars for forgetting about this record ;)