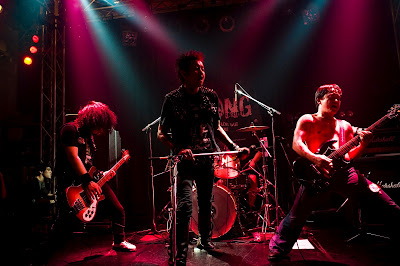 Another band from Japan and i know what you thinking... FUCKING YEEEEA (without hhhhh, short and sharp as a japanese sword)
Late night, the rain keeps falling, make your wet boots much more wet... the dark alley seems so peacefull but suddenly you feel a warm unfriendly blade licking your beautiful neck... don't panic... use reflexes and kill that bastard, drink his blood and listen to a slang's album (this one i suggest)...
Slang is a 20 years old (much more older than a good, mature scotch) band, that fucks some ears just to have fun. Coming from sapporo city, these maniacs are the perfect soundtrack to throw some rocks in the first police pig you'll meet outside your home...
Energetic, pissed-off, fast and angry with some motorhead influences (listen to "no hope no life" and "humanistic disorder"), dbeat magics and stuff... reminds me of early blowback a lot (great band also)
THE IMMORTAL SIN referring to the Hiroshima Nuclear Detonation (the album cover is of the lone surviving Hiroshima Dome)
What else to say?

Pay some respect, losers :
Fuuuuuckkkk....i had no idea of the existance of this jap bastard, until i read about them in the ''Japan and Disorderly'' article in Mountza no.4 (written by Fabsie and ..''aaghuum''..Wiho of the not so good BURIAL..hehe!!), and dear ol' mikey Mike posted the ''Immortal Sin'' LP.

Heavy japanese hardcore (i feel i've used this fraze way too many times this month!), metalic influenced, but PUNK dominated!! Jockingly, this is how CROW would sound if they played FORWARD covers....Dear gents and gals, SLANG has nothing to fear, and stands fast amongst the titans of the japcore [ ;) ] genre. Bulldozer-like crusty hardcorepunk, pullverizingly beautifull, with a full bass sound...they have earned a spot in my new cd-r compilation for driving around zofos city, aka. @thens...

Slang's 2010 New follow up to "The Immortal Sin" a new 12-song LP called "Life Made Me Hardcore" is out now in the U.S. on Prank Records. www.prankrecords.com. You can also find more info on the band at their website: http://www.slang1988.com