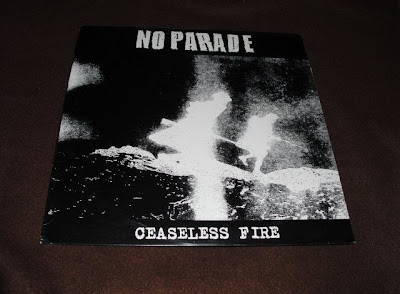 After 7 fucking hours of a trip (.trance.travelling.) to hell aka a shitholl of 15000 people in the north west of the shithole of greece (see previous posts), i managed to reach my target aka the bed of my youngness... So, for this fucking time my mp3 player played - over and over again - an anathematized type of hardcore punk... These three fellas fuck the fuck around with this awesome, in-your-face, no artsy-fartsy, no shinning production, no tzoutzou mproutzou, hardcore punk...
But, first i'l give you some notices that i found on other blogs :

"Personel of From Ashes Rise crank out 15 tracks of stripped down Hardcorepunk in a Deathreat/Talk is Poison/Balance of Terror/Sleeper Cell kind of way.
The tempo is kept pretty moderate,3 participants (bass,guitar,drums) of which 2 share the vocal duties"...

..."Fifteen tracks of powerful but catchy hardcore from No Parade. The style is similar to From Ashes Rise or Tragedy, and in fact No Parade features members of From Ashes Rise. The music is harsh and hard hitting with screamed vocals, but the melodic underbelly keeps the songs memorable and almost pleasant"

In fact this band is From ashes rise 'cos all the three guys that no parade is / was used to play in from ashes rise...
My own ear say to me though : "this is a well-played hardcore punk. Take for the musical carpet the defined from the masters of genre, d-beat (yeah, i know. D-beat is a dogma, a religion etc... Yeah! Right, you losers), fill it with some terrific dis-riffs plus well-hidden "from ashes rise" tricks and dual male acidic vocals. Plus it's a release from partners in crime records (tragedy's bassist label) with the just perfect cover... (download to see it, you fucker)
And i will allow d-bill to say fabian's (burial's drummer) opinion about no parade, njoy

Dbill's sideburns :
On the spot, tuff and hard-hitting, without any goofing around, pure energy hardcore punk stripped to it's core..this is the sound of No Parade.

No need to  tell who is who since Mike did a pretty good job above, but to keep things simple think what From Ashes Rise would sound like if they replaced part darkness (..vlepe ''zofos'') with anxiety, and part crust epicness with straight forward attack mode (..vlepe ''lakwnikothta'', ''mpes sto pshto'', ''a'i'ntaaa pameee'' kai alla tetoia).


His Masters Voice, aka. Fabian says they are better than F.A.R. and you KNOW you should listen to a guy who plays in a band called Burial.

This is hardcorepunk and you should listen to it.
Posted by mikxxx at 04:40

d to the bill

Love your blog!
Could you re-upload this album and if you have their EP or tape?
Thanks up front!