Hours after hours, i'm feeling tired. Lately i'm listening a lot of old-school hardcore in your face punk. Including Sucked dry, straightjacket nation, Mad world etc. You got the picture. 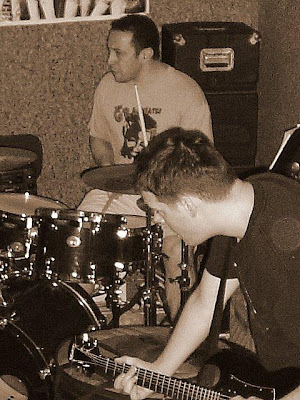 Janitor was a houston based, thrashy hardcore band. They play fast-forward thrashy punk (and this is the worst review since... i don't remember) awesome thinks described better as way too punky for your white rich ass hardcore. The guys really have it and you got to check'em out.

"We recorded a 19 song LP at Texas Music Studios in Houston sometime in July 1996. Originally, we wanted to release it as a 19 song LP but LPs were too much to press and, at that time, hardcore punk wasn't very popular. In the end, we released a 10 song 7" on green vinyl about 1998 on our own label. It sold fairly well and was very well recieved by MRR, making one of the top ten lists. They asked for an interview and all that shit but at that point we had called it quits."

Fuck-off, good-night. And buy it here. Janitor in your ass.

Great post, I am almost 100% in agreement with you

i was in janitor. i was the guitar player singer. thanks for posting this. if you guys want anything else from my label come on by and download it for free...

hello every one - hope yous had a good xmas - just back from tenerefe weather crap , all the best for the comming year -
michael