Before i start to explain my choice to post a not so familiar for the blog band, i have to say sorry for the lack of posts lately. Hanging out too much with the Destino final guys has burnt my braincells (fucking morons...). 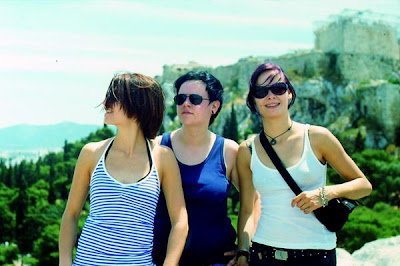 Sleazy inc. operated is an all-female trio, based on leipzig, germany. I can describe their tunes as a mix of old-school riot grrrl punk with tones of indie rock and grunge influences. You may be asking what the fuck is going wrong with me, but i have to tell you that sometimes everybody needs a "time-off" of all the noise. Hope you'll understand.

I have been among the lucky ones that saw that beautiful girls giving an unplugged show in a squat here in athens before some years and i was stunned from their approach in several topics as the "women" thing, daily-life or even the attitude. My smiley face gave me the opportunity to get their sleazy listening cd for free (just kidding, they were kind enough to give it to me for free 'coz i was broke). I have to admit that i had a crush on the girl behind the drum-kit. So, be prepared for some up-tempo but in the same time melancholic songs with not so much distortion, but played by the fucking heart, and i guess that's the important thing. Not forgot to mention, these girls played in the movie Meer is nich.

I always motivated by you, your views and way of thinking, again, thanks for this nice post.