I have made this post a long time ago, but the rip (especially the b-side) was a crap, so my good friend 7inchcrust gave me a truly helpful hand with the rip of this LP. He ripped the b-side of his own copy and cut the tracks. So, finally this rip is good (not soooooo clean - the a side, the rip is mine. don't be angry mr.7inch) and you can use it at your favourite dj parties when you want to play tracks like "the fall" in a quality better than the 128kbps. So, from the past come the storms :


Arnitiki stasi (Negative stance) was one of the best greek hardcore punk bands outta greece.
Formed in late 80's, the band appeared in many tape-compilations, both greek and abroad. They have released a split lp with Kismet HC, a 7inch (get it here) on profane existence recs (profane claims that this is on the top-5 releases the label has done since nowadays) and a full-length lp.
This one. 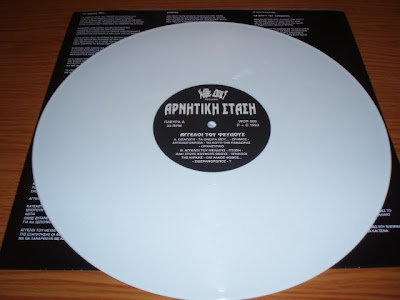 Released in 1993 from wipe out records this masterpiece of pure energy has 11 tracks of perfect hardcore "the-greek-way" punk. I have said before, I think greece's scene (if you can call it this way) have had one of the most technically accomplished bands around the globe. Mainly influenced by the greek punk bands of early 80's, mixing the heavy (and thrash) metal influences of the late 80's era has given a blend of sounds to be named as catchy, strong, technical, from the heart and finally over the top.


This release is the most "fast" and angry (and the last) the band ever released. Compared to the previous releases that have more melodic and mid-tempo tunes, this one "take-no-prisoners". Give notice to the excellent drum-works and the catchy-as-hell guitar riffs. Members of arnitiki stasi used to play to Viomihaniki autoktonia (Industrial suicide). Also, makis (bass-player) left the band before the release of this one, to join the forces of anasa stahti (ashen breath).

I want to say a lot more, but I feel that I’ve already tired you, so...

Is it possible to have the files uploaded once again?

I cannot find anywhere this masterpiece and I receive an invalid file message from Mediafire :(