Terrible feelings - death to everyone (2011)

This is my latest obsession. Terrible feelings comes from Malmo, Sweden and delivers the catchiest punk rock i have heard in ages. I can imagine that they have been in numerous other bands but i don't have a clue. If you see a crustie with lots of patches of Framtid and Death Dust Extcractor and a girl in a Repulsion sweater talking on their new favourite band (it happened to me and a fellow hipster friend in a gig some days ago), then you know this worth a listening. 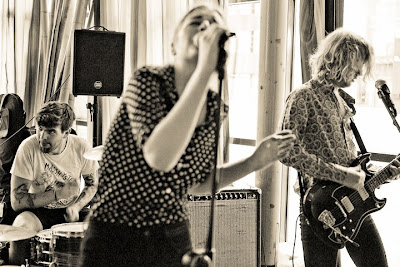 The guy from Tadpole records hooked up with this from a youtube track and i can't get enough lately. This band creates so beautiful environments, a psych  feeling of loss and defeat played with no distorted guitars and nice rolling drums. The songs could be described as a mix of modern punk rock with power pop. They remind me all the female fronted bands that wrote history in the underground hardcore scene but i think they're gonna be bigger. Masshysteri and Gorilla angreb comes to my mind flerting in a bar full of smoke with The Wipers and The Enstranged. "Death to everyone" is the Japanese release of the two 7'' ("tied up" & "impending doom") and the first demo with better sound quality, released from donuts pop records.The song "Hollow" have THE lyrics : "I punish people round me, i know they care for me". Dark, vein-cutting and punk!