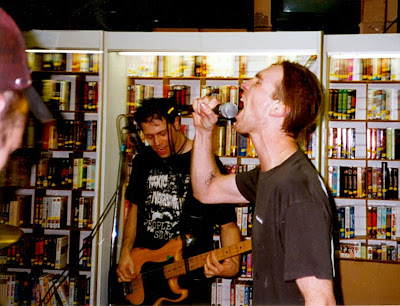 While i was reading Lo-res viscera blog i misunderstood his Decrypt post with Decrepit. Decrepit came like natural in my mind, so i thought this is a good way to say "have some nice vacations guys, 'coz i'll certainly have! starting tomorrow - see you in september". Sweeten things up, i added - again - a cool pic of the band.

As i have already wrote decrepit was from seattle including members of Whorehouse of representatives (a great band too), Whipped, Cease and desist. Later on the mighty Consume also. Jim plays bass on Deathraid nowadays (great guy).

So, if you wanna hear some crazy crust-meets-grind tornado, here's your new favorites. Decrepit is one of the most vicious, fast, catchy crust band of all time. Imagine a drummer that when he was a baby his mother instead of milk gave him galons of gas so now he destroys sidewalks with his sticks. Very impressing "players" when it comes to the "game" aka grindy-fucking-crust. they have some great lyrics dealing mostly with politics (call me : ageism, elitism, pacifism, militarism, homophobia, and the God myth). I can describe them as more extreme Disrupt-meets-Resist group.

Extra tip is that in the thanx list of this cd they  include Agrinio's punx. First time i read this, i was laughing to death, knowing that agrinio is a small city in the centre of greece, full of moody weather and active punks (not the all-day drinking type of think-or just back in the day). So, i had a conversation with one of the agrinio guys that arrange them and said me that Decrepit and Detestation were the best guys they have ever meet (from the amount of crust bands that have visit greece in the late '90s). They had stayed in agrinio for three days, drinking tsipouro in the old-school cafe of the city among dirty farmers (imagine 60 years old guys seeing some crusty dudes with patches etc...lol).

I know that the good friend batguano loves them and you can read some things about'em in his blog here.

And one friend of mine still ows me my Decrepit t-shirt, i "loaned" him - back in the day - with those gas-masks...aaaarrrrrgggghhhhhhh!!!!!!!!! (mmmm, and a disrupt cover, did i mention that?)

thank you very much

Nice one, i remember this band but never actually heard them...thanks!

Hey, it's about time I got me some CD rips of the mighty Decrepit. Thanks, man. Nice picture too; very rare for this site! Books and Crust-core together... very cool.

Enjoy your vacation! And, if you get around to it, I re-upped the Conversions 7". Later.

hey grave - you must respect to this band...awesome

bat...mate i got back from 9 days vacations
feeling exausted right now but i'll get back on track...
thanx for the conversions 7''. cheers

i know this is old, but any chance you can re-post this? nobody else seems to have this, i need my decrepit fix! awesome blog...thanks again sir!