Deathreat - The Severing of the Last Barred Window... Plus Early Tracks 97-99

It's a weird feeling when you wake up and you know that you saw Deathreat in your sleep (a live concert). Good or bad? I don't know, but i'm searching the blog for this band and i can't find any. So, it is time... 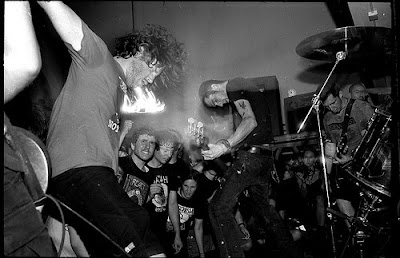 Travelling back in time we go to 1996. A shit-playing band called His hero is gone (Fifteencounts...remember?) has already "died". Some members go to form other bands. The burdette brothers moved on and from memphis go to portland. Deathreat started. So simple...

Speaking with todd for a little bit (as far as my english allowed me to..) when Tragedy came in greece for three gigs, i got the impression that the guy doesn't do just gigs but he lives for it. You can see the blood boiling inside him and his eyes going mad while every single word coming outta his mouth like a kalashnikof shoot. And when the gig is over is so calm and friendly and all these stuff making me wonder "how is it doing it", the "grandpa" fucker. Check an interview of tragedy here by the way.

Let's start with a family tree of the band known as Deathreat. Here we go : On guitars we have Paul burdette (well-known as a great drummer!) and Stan Wright. On Drums we have Todd burdette (well-known as a terryfic(!!!!) guitarist). Brad boatright on bass and Billy Vavies on vocals...
These guys have been in the diy scene for centuries with bands such as : His hero is gone, Tragedy, Signal lost, From ashes rise, Lebanon, Call the polise, Copout, Criminal damage, Severed head of state, Warcry, Trauma and No parade. And please name me one mediocre band of the above mentioned, not bad, just mediocre. It does not exist. All their bands were great. So it is DEATHREAT.

My first exposure to their sonic ear damaging was five years ago when i buyed their cd reissue of "the severing of the..." (this cd you'll download - the rip is from my physical copy) from Partners in crime records runned by billy davies (yes, the vocalist). While i was excepting clearly neo-crust full of great riffs and drums, melodramatic lyrics and acid-drenched vocals i was shocked 'coz i had to deal with simple-played hardcore!

Mixing all their influences from japanese thrashy hardcore to old-school american hardcore punk (i discovered Koro through their cover to the"Dear sirs" track) while some tracks ("who counts the bodies") reminds me the solid scandi scene. I'll have the sweet pleasure to see your ears pieced from within. Fast d-beat, great riffs and simple-angry vocals. and some skate-boards photos on the back. Great tracks like "Pay no mind", "First world imposition" or "Bodies pilled higher..." can't be recorded or written every-single-day. This is a masterpiece guys. 38 tracks in 36 minutes. Fuck yeah.
Even if i firstly was unsure if my buying skills was once more awful, three months later i put on this cd on my stereo and i felt a punch in the face. Speechless...

This cd contains the 1997's Lp "the severing...", the split with Talk is poison from 1999, the self titled 7'' from 1998 and the split with D.S.B (same period). Prepare to hear who the fuck all these "cult" raw hardcore bands nowadays have ripped the hell off. Guittars, sounding etc comes from Deathreat.
If you know them already and you have this one already, guess what. I don't give a fuck.
DEATHREAT

You're under careful control
Posted by mikxxx at 13:56

found a copy of this in the used bin a few weeks back. love it even if it's not as awesome as the d.s.b split or consider it war. i been doing ok. busy as fuck with school, gardens, food not bombs etc. so sorry for the lack of posts. been thinking on doing a post about skizophrenia cuz their demo and 7" have been blowing my mind lately but we'll see if that ever happens. cheers keep up the good work.