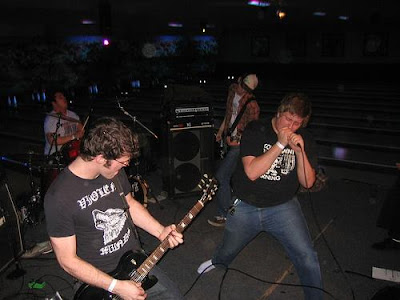 It was the other night while i was chilling with my friend bill on his apartment talking about our vacations, the rising of right wing in athens and europe and the struggle against, the hot girls that we never saw this summer, the mojito against sex on the beach cocktails, the nisiros against astipalaia islands, and a whole of other craps that can go passing by a punk's mind on an august afternoon. Then his roommate came in after his 8 hours daily grind on a shitty job. We said "hey, man" he spared a look at us, he went straight up to the turntable, picked up Wasted Time's "No shore" 7'' and he started to break his neck fast to the "Hostage" track (i have to say that we listened to side A three times straight). I can say that i loved their lp when it came out ("Fatherland" is THE track musically and lyrically) but i never pay attention to their seveninches (same thing with Government Warning, and their drummer plays also here) and two days now i'm listening only this masterpiece. I know that the majority of you, listeners, you already know how amazing this 7'' is (it came out 2007 through Grave Mistake records) but for all the nerds that passed down of your nose, give it a spin. Music judgers, bloggers and confectioners told me that they sound like Poison Idea, Negative approach and SSD.

I'm wasted my time with you!