I met borja a cold and rainy night in an ugly and dirty squat. Blitz were hitting the stereo with “Never Surrender” and I saw a guy with long sideburns and a Wretched tattoo and I told him : “Are you the friend of Roberto, from barcelona?” and he answered me “yes, but i'm from bilbao. You have to listen to the Mau Maus”. I never listened to Mau Maus but I really appreciate Borja and all his crazy talking about free sex and riots. This and the next post will bring you some unpleasant feelings. Borja created a great post about Out Cold and d-bill will continue on the Out Cold topic. The rips are taken without kindly permission from Fugitive equilibrium (the best blog in the whole world), I think marc will have no problem because he really loves Out Cold. Cheers on... 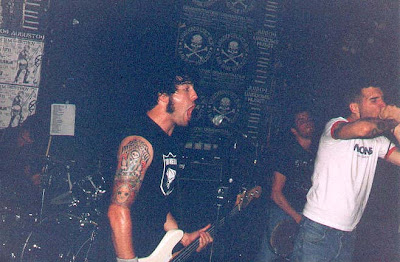 First off all, once upon a time I met Mike. In Athens there are not so many anarchists who listen hardcore in such an obsessed way some of us do. Anyway it came out that both of us love Out Cold. Soo he told me to write something about them /cause he is bored writing all the time most of the things on his blog by himself. I still remember the first time I heard Out Cold. It was in a radio show of a friend of mine. Since then, a couple of years already, I've been looking for every single song of this band. I still find here an there sometimes records I never listen. For me this band is very special, because they played hardcore in a time where no one gave a fucking attention on it. Now hardcore (played in the way of the 80/s) is being played more and more, but sadly the singer of Out Cold is dead. Thank you Mark for this amazing emotions I get when I listen to this amazing band. But anyway, now I wanna write about two of their seven inches which are in my opinion fucking amazing. Ok, all their records are fucking brutal. No fucking way of ignoring this band. If you do it's because you fucking like shit like Ekkaia and your're EMO!!!

When a band starts a record with a song called Lost cause, then you know you're listening the right shit. Everything is perfect, the voice like always, hate pure, it's aggressive and I wanna kick the shit out of someone.  The fucking solos of the guitar, in almost every song, punk rock as it is. The drummer hits fast and slow, always beating, not playing. This record is sooo fucking brilliant that I really don't know what to say. You can't describe things like this. My brain is boiling, I wanna go now out of this flat and smash everything with my head. On the B-side Fantasy won't stand is the first song and it has a slow intro which let you predict nothing good for everyone. Fuckhead is a slower song but not different from every single other song. You wanna scream to everyones face this: FUCKHEAD!!! And finishing this masterpiece of hardcore. Like an animal… I definitely feel like an animal with this and specially after it…really listen to this, buy it, steal it from your best friends, download this whatever… If you don't like it you are a fucking idiot and i'll find you… 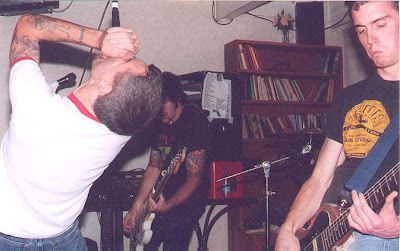 Starting with No Side from Japan, this band sounds the way Japanese hardcore is. No fucking solos, no fucking Burning Spirit. Like Gauze, but more dirty, more distorted but without becoming noisy. This band reminds me a lot to bands like NK6. It is direct, straight and tight. When you listen to this you hate your friends. Imagine what you'll do with cops and fascists afterwards… And now Out Cold, I have to say one thing first off all. All their songs are fucking brilliant. But the result is always different because of the recording. One of their best seven inches is Planned Accident, because the sound is incredible brutal. Out Cold never played very different but their sounds change on the records and make them be better or not. Here again, a bunch of crazy volunteers ready to jump in a black hole without thinking about the consequences. This sound is simple but great. The voice like always, but the rest of the components play a fucking brutal way of how you can play hardcore. Like a chainsaw. And if you interfere you'll lose your head and this is what you should want when you listen to Out Cold.

Labels : Hardcore, japan, No Side, Out cold, usa

Hey Mike. Well, with a blog endorsement like that, how could I not give you "permission"? Thanks, man. Out Cold forever!