fuck you, this is Mau Maus

The kind asshole who their stepfathers called him borja, sent me another great review folks (and save me a huge amount of time) with the promise for another two columns (have you seen the length? alright then...). So, the pride of basque country delivers some aggressive punk / proto hardcore madness and you should take his words for granted as i am right now (these guys sounding like early Chaos UK with a bit of Blitz). 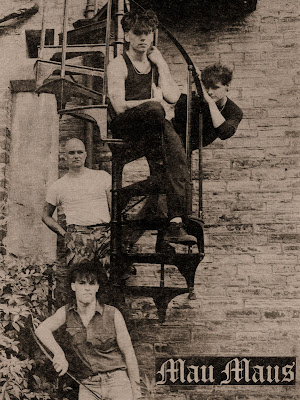 I was surprised that Mike remembered our first conversation. It´s more or less true what he says. But whatever, thinking about Mau Maus and that he didn’t listen to them let me thougt a bit. I am a punk fanatic, I was born for punk and for hardcore. Specially for the aggressive and fast one. I don’t care where this bands comes from or if their lyrics are not 100% political. This is anyway a important point of view, because just singing about anarchy doesn’t make you an anarchist, and being one and talking all the day about it is quite boring. So after so many years listening punk and hardcore and trying to be an anarchist the moment came to talk about
Mau Maus.
I don’t remember the first time I listened to this band. I think it is a lot of years ago and for sure one of my friends from Barcelona who opened to me the fantastic world of European hardcore. Because this is a very important think to say. It is not about fucking countries and nationalism, but the European hardcore (not just the English, but the Italian, the German, the Spanish, the Yugoslavian,…) has become a shadow inside the world of hardcore. When in the 80s in the USA incredible bands started, in Europe there where as well totally brutal amazing hardcore bands. Even much more aggressive and rough, and not slower or something similar. One of this bands is definitely Mau Maus from Sheffield. This is HARDCORE!

Their first seven inch, Society's Rejects, is in my opinion their best. They don’t take fucking prisoners. Two, three, four… what a voice, you feel like a society's reject. A society you don’t want, and which definitely doesn’t wants you. The drummer hits the snare drum like a prisoner the bars of his cell. With hate and doesn’t regret it for a single moment because he wants to get through. Yes, that’s it, this single is a fucking hymn for every prison escape, into a society you hate and you want to tear down, nothing has to last, not even a single brick. If you listen to this during you are driving a car, you wanna hit every cop, crush into every bank… If you are still alive when you are listening. Leaders (song number six), the enter into Crisis, which starts soft, but the kicks your head. And at the end, when you listen the Oath, you´ll remember a band called like this and you will think that Mau Maus is hardcore and everything you listened before was just power pop.

The second, No Concern and the third, Facts of War, seven inches don´t miss a bite of the furiousness of the first seven inch. They are just more clean recordings. The aggressive moment when you want break every single of your bones in the library during you are listening to them wont stop. But you´ll do it more carefully, because after the first seven inch you´ll be already in a wheelchair. This is something forgotten, and it must be discovered again, hundreds of punks singing Mau Maus while they assault society, that’s a must, all what I want. They kids will have their say!

so sorry the link is blocked.