Thanx to great guy the japcore world know as fabian...take his words for granted and cut your throat! 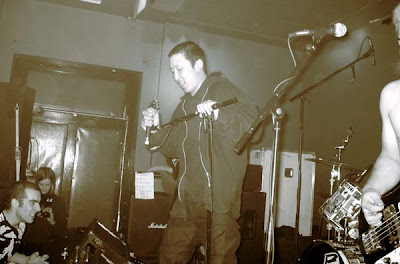 - Fabian, the mongoloid behind Burial's drumkit :

So, what to write about CRUDE/s album from 1996...I am not really sure when it came out but it was recorded in 1996, 14 years ago. I think it came out on Straight Up Records in Japan and on some label called Dynamite kids from Belgium. Whatever, like their earlier stuff it's a little raw, which suits the songs really well. There are ten tracks on this record, the first song being kind of an intro which is pretty atmospheric and moody. My favorite track is the fourth song on the first side with a Japanese title. A real punk stomper they perform live on a regular basis. Come and get wild! And bring weed for them, they will appreciate that. I am not sure if they will like Tzatziki as much as I do, but you should try. Back to the record. On the LP they were a four-piece, now they turned into a three-piece, having two original members left, the drummer and the bass player who are brothers. Weed-adorers. Potential Tzatziki-fetishists. Unfortunately their new LP is already sold out, for all of you who wanted to buy it...but so you can safe your well-earned cash and get `em some dope. Opa opa, otsukare!!!

I've enjoyed their live concert yesterday, cause you don't see japanese bands here in Greece everyday.
BUT their perfomance was not good at all(I guess too much drinking prior of getting on stage was the problem)
In a way I knew it would be like that. You can hear it in their latest releases like the split with Wandering Folk,that their approach as a trio made their performance less full-on-aggressive and maybe a little bit sloppy.
Personally i liked it cause some of their songs like distress and many other are personal favourites, that I have been listening the last 2 years, side by side with other japcore bands like DSB and Backbone. So it was great to see them live. I write these words cause nobody wrote anything about this post. Cheers and Beers Mikxxx! Vang.

Everything after Attitude has been disappointing for me. Don't know why they had to release the same two songs three times either. Haven't heard the new LP but it's a rough 4-track recording again so I'm not getting my hopes up.

it's very diifficult for a band always to be an ace and crude have threea mazing lp's so...
i'm waiting for the new one

Yeah you're right. I'm probably expecting too much because of how great their earlier stuff is. I saw them in Japan with Nightmare and Burial and they ripped it