Date and time have been arranged. Pack my things like a lunatic and catch-up the subway. My driver and dear companion through the next two days d-beat odyssey, d-bill has been late so i got the chance and enjoyed a cold coffee. As we finally hit the road listening to some old good Pink's tunes (u & ur hand etc) i couldn't imagine what i will go through the next hours but time were our ally... 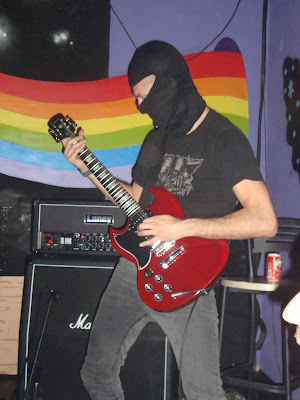 Arriving on the university of patra was a pain in the ass but finally we did it, even if we have not seen the first two bands. My Turn were on stage and played really rad. Short songs, nice black flag's riffs with a positive feedback, so i didn't miss the chance to do some backing vocals on "can't tell no-one" cover. Deathbed who?

Now, let's get to the point. Seeing some familiar faces going in the first line for the upcoming war i fueled my throat with some stinking fix beer and got my place στα χαρακωματα του βουκολικου πολεμου.
The four horsemen of the crustcore apocalypse occupied stage with their axes well sharpen. Wearing wigs, they started to slaughter our ears and the only words that can describe the feelings brings in my mind the bay-area thrash of '80s : "On through the mist and the madness, We are trying to get the message to you. Metal Militia. Metal Militia.". Soon enough, we - the fans(lol) -  hit the stage and every-single-one member of the band was upon our backs, we lift them again and again while guitar solos and drum blast-beats hit back on us like tornados. We tried to lift also the drummer up but the only think we managed was to destroy his drumkit, while he was trying to play his hi-hat with his body turned upside-down. A masked-man attacked midas on his guitar solo number 1342516278115, hitting him hard on his stomach. He only made his solos be meaner and eviler. Agathocles and Extreme noise terror covers just made the pain lust (and last) longer. The band was tight as good as a pair of denim jeans on Lemmy's legs. I have to admit that my vocals on cripple commander were shit mainly to the admire i have to the bassist of the band - known as Machete - so i lost my words, shit happens. Great gig and great people.
Conclusion : First gig for such a great band in twelve years, and propably we'll have to wait another twelve to see them again. Support the band, drink whiskey.
Posted by mikxxx at 12:58