Some days ago i was chating with a friend that used to be in lund, a small town of sweden (known for great hardcore bands, like snifter and everyday madness, even some connection with intensity) to rent a house for his university's studies. He told me that if he stayed there certainly he would die from boredom and misery. If you are born and raised in a city like athens with fucking everyday's life intensity that drives you crazy (and you get crazy if you lose that intensity) for sure the green mountains of scandinavia could be a little bit annoying...

Moving from sweden to norway, here we have a band from oslo featuring members of hombre malo and haust. It's name : Okkultokrati. Four guys who have gained a lot of respect within the underground black metal and hardcore circles mainly for the way they approach these two genres. Scandinavia's daily life influences drives people do insane think i guess like forming great bands... 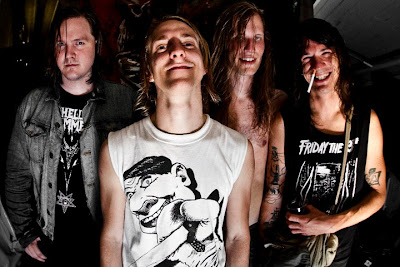 Wearing darkthrone shirts and playing hardcore punk would be, besides a great horror movie, the perfect description about those long-hair, tight-pants, dark guys. Imagine the first bathory's lp with celtic frost in a Poison idea feast.. Yeah, sure that's the case.. Punky in your face hardcore full of proto-black metal influences... Down-tuned guitars and mid-tempo drum-hitting creates a dystopian and at the same time sludgy environment. Some reverb adds some spicy taste (no influences from Destino final, or maybe not?)
Great fucking music and hateful lyrics from guys that lives in scandinavia, that is known for the huge suicide rates and extreme music tastes. A band that describes it's own existence under the "True norwegian metaphysical atheist black'n'roll" belt. So, if you wanna hear some good Black flag meets Darkthrone hardcore full of black metal elements "no light for mass" it's everything you want.

The funny think is that i tried to order some copies from ormeyngel but with no pay-pal. Ormeyngel very polite told me that they can't sent the stuff due to currency exchanges. So, when i told it to my good friend dbill, he answered me with a funky style: "Kala o Norvhgos to exei kapsei apo to polu kruo kai ton radienergo solwmo pou psareuoun!!! Pes tou na mas pei poso einai to poso, kai 8a tou ta valoume se Norvhgikes korwnes tou flwrou!....ti einai autoi oi Vorioi re malaka?!!!!....Kollhmena muala!!!!" HAHAHA.
Check also an interview here.
Also if you got fucking pay-pal go and buy some stuff from Ormeyngel records (the label is running by Okkultokrati guys)

everytime i listen this lp
i got those darkthrone lyrics on my mind : "You call your metal black
It's just spastic lame and weak."

and god damn this lp is old, cold and true till the fucking heart and for sure no lame and weak

It just sounds like the greatest crusty uk 80s hc meets citizens arrest to me. (with darkthrone shirts)