First of all, hope you like the new shape of the blog.
Secondly it has been a while and since the world cup started yesterday i think it's time for some refresh... 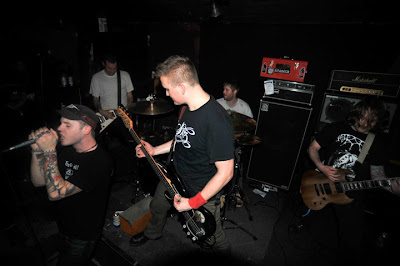 Some time ago, in the wanting list - on your right - i had a band named Raw Nerves from portland, oregon (don't be confused with Raw nerve from chicago). So, a guy named erik contacted me and finally send me Raw nerves's demo and seveninch. Why i'm bullshitting like this? Some days before i was in a forum asking for the new raw nerves 7'' (named "we must be dreaming") and guess what. Some band member replied back,  his name was erik!
When i asked him if he was the great guy that has sent me raw nerves candy he said : "yep, i wasnt trying to make it a secret, but i guess maybe i didnt mention that. haha"
Once more the communication with bands and places is so fucking wonderful. So all the cheers of the world goes to Erik (besides drummer of raw nerves, the man is the guitarist of Exit collapse and used to play drums in Protest stagnation. Fucking portland guys! They are everywhere.)

Now, raw nerves is a terrific hardcore band mixing their anger with very dark melodies and desperate drums. Heavy political hardcore but not in the usual forms that portland use to offer. I have read on the net the comparison with bands like Bury the living (BTL are way more fast) or acts of sedition. Now for me, i can't find the connections with bands, not that raw nerves are so unique but they have a tight and blistering sound that i love. The drums are so fucking solid that fill negativity and power to the whole recording while the bass is distorted enough to drop-down a wall. Add matt svendsen's howls and screams (Squalora's, The Anti Difrancos's etc fame) reminds me a lot, vocals-style of great bands like Iron hand and Oiltanker. The demo has seven tracks, the four of them have different mastering and released as "Murderers among us" 7''.
Except the new ep, they're gonna release a full lenght lp some day soon, so stay tuned. And as the fucking MRR magazine wrote : "certainly the ingredients on this EP could easily equal a fucking killer live show. Especially in a basement. Especially if it were really hot. And especially if there was beer."

for one more time
my opinion that the
first albums from a band
are always better is here again..
i like the demo more,
vocals are more together
with the music,
in general really pissed vox.
nice guitars too.
cheers,
a.