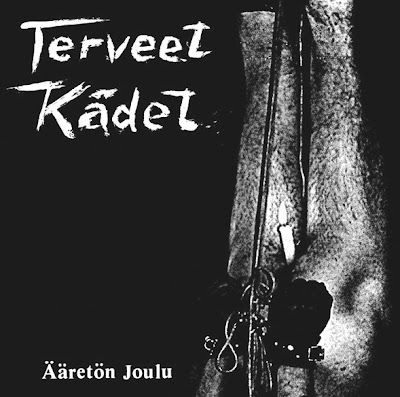 First band of our mini special for the Finland series, and could not be else than the first punk band outta there, Terveet Kadet and their 1982 ep (their third ep) Aareton Joulou. Although i had some concerns if we must post their self titled Lp, borja made himself clear : "the 7'' is way better".

-Borja, with candles in his butt :

It is always a difficult thing to talk about finnish hardcore punk because of this fucking diversity they had. bands like kaaos, lama, 013, riistetyt, rattus, appendix, eppu normaali (the first seven inch, Poliisi Pamputtaa Taas, is one of the best punk records in fucking history) bastards... or fucking destrucktions... you see and even much more bands i don't write down... exactly when i talk about terveet kadeet, then i just talk about hardcore. last time i tried to explain the differences about finland and sweden i said that finland was freaky and crazy and that swedish bands were just more brutal... and i am fucking wrong. finnish hardcore is freaky, unique and totally ultra-brutal. brutal as the wild youth in athens getting crazy in front of the fucking cops. this unique singer, screaming the last shit out of his mind, out of his ass, out of his skin and in fact out of YOUR fucking life. fast as shit, when hardcore was being invented and it was definitely the best time. this band made two really great 7 first seven inches, but when you listen to to aartun joulu (fucking 1982) 7 inch... then you don't really now why nobody was able to play close to this totally demented frenetic hardcore. yes, this is the word. tervett kadeet are just a demented hardcore and frenetic band. and maybe one of the few ones.