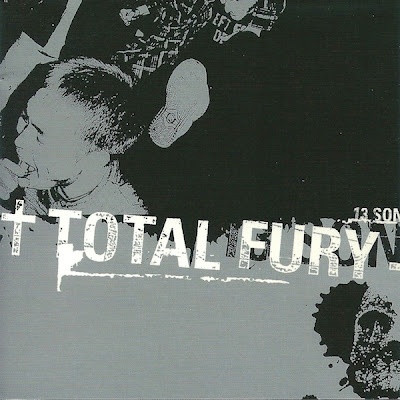 It's funny how some very good albums go unnoticed. Total Fury – for me – besides a great name was a band who were totally under my radar, and the connection to them was once again Out Cold and I explain. Too Circle records from japan will release a tribute to Out Cold and one of the participated bands is EYESORE. So, after a quick search through Robert's blog (you know, I respect myself and go there every day, I recommend you : do the same) and the guy had already Eyesore's demo up, where I read : “If you are like me, then you've been waiting for some band to equal the TOTAL FURY's majestic 13 Songs full length”. Total Fury come (or came because they are already disbanded) from japan (Sendai city if i'm not mistaken) and they have nothing to do with their fellow japcore freaks cause they deliver old-school blended hardcore punk straight outta Washington and the year is 1981. Total Fury could be the japanese clone of Minor Threat. They shout, they run, they demolish. If you like speed-up melodic hardcore punk in the veins of early 7 seconds, the Teen Idles and other Dischord bands you probably like Total Fury. This album is already 12 years old, guys. If you like slow shit don't even try it.

I have both releases from Eyesore, awesome band ! I have everything by Total Fury, definitely awesome band too ! I have huge collection of Japanese stuff, got to love Japanese Hardcore !!!!!

i have ,i have,i have...
& i forgot to mention it it in my other comment but i also have my own dick up my ass,you gotta love it!