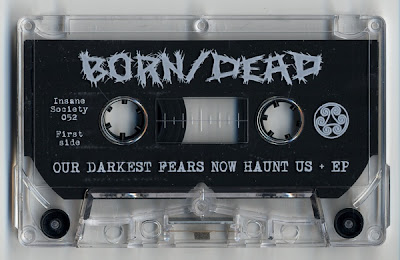 Back in 2007, a band from Canada called Ballast played in my city - a really crap band guys - but they had with them a huge distro where i picked up this tape without knowing shit about a band that really had a big impact on me. Born/Dead came from Bay Area, California and they were active from 2000 to 2008 if i'm not mistaken. This tape contains the "The darkest fears now haunt us" Lp and the "self titled" ep (also known as "24 hostages" ep) and was co-released from Prank records and Insane society records on cassette back in 2003 (almost 10 years ago). Their musical style could be described as a mix of of up-tempo hardcore punk with lots of elements from uk anarchopunk and early us crustcore. I remember when we wanted to describe fast political bands we were saying "they play like Aus-Rotten and Born/Dead". In this release the band has a more straight forward punk production (and playing) and not so crusty hardcore as their last lp "the final collapse". The first track "A look at the world" kicks in as a great intro for what is there to come, mid-paced and heavy just creates the atmosphere for two small dynamites "waiting" and "accuser", short sharp and blowing. "The last to starve" have all that you call great riffs and bridges while "indigent" is more likely my favorite Born/Dead song and the list can go on while the ep contains more ragers like "deadtime", "homeless" or "no one gets out alive". This shit is critical, dude


"Are you really satisfied to live with all these boundaries? Born, work, pay tax, at 65 get social security. Procreate at 30, create a modern family to complete the cycle of middle-class society"

Definitely one of the most important punk albums of the 2000's. Thanks for sharing!