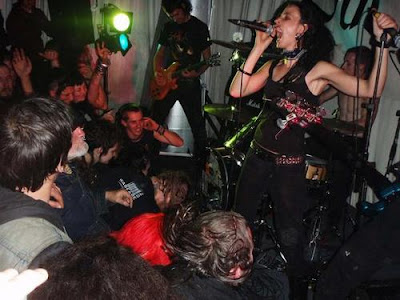 Schifosi was one of my first posts, when i first started this blog and i barely remember why i was writing so short columns. Looking around for some modern heavy crust i saw marc's latest post in fugitive equilibrium  and remember that i have to post good crusty hardcore since ages. Trying to remember any good crust band my mind comes automatically to Melbourne's finest crust act : SCHIFOSI. With members of ABC WEAPONS, TERRA FIRMA and PISSCHRIST. They have released one lp, a 45 rpm 12'', two 7''s and a split 7'' but unfortunately they disbanded sometime in 2008. This 7'' from 2004 is my favorite release with the ultimate grim anthems "Law is freedom" and "Drowning in the aftermath". The guitars are dark and heavy while the d-beat drumming helps the tireless amazon voice of kate to release true anger and despair  through some social political lyrics taken from a personal angle and thrown into the industrial environment of big city's life and guees what, the musical similarity to Tragedy (especially the long heavy riffs and the backing vocals) and Asebia is more than obvious and that's good, plus this is my own cd-rip on 256 kbps. Spare 11 minutes of your life and smell some darkness. if we start drinking concrete, pay for the privilege of breathing, eat paper and talking with numbers, then Half Hit World is our name.


"a currency of blood, shit, pain and despair
in this caged hell
no air that we might breathe
no light that we might see
darkness and concrete
we are the measure of freedom"

This is such an amazing 7"; one of my all time faves. Thanks for the CD rips!

Abc Weapons... I was supposed to include some re-rips of their stuff in my post by totally forgot. I'll get to work on that.

@bat : always appreciate your comments...abc weapons was good also, but the difference is the vocals for sure.