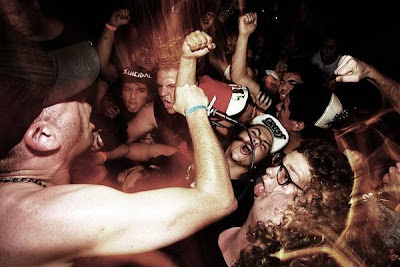 Mouth sewn shut comes from Boston, Massachusetts and you may have heard of them because of their connection to the DIY pioneers Toxic Narcotic, indeed Bill Damon and Will Sullivan create this band after Narcotic's hiatus somewhere in 2005. They have released already two albums, 2006 Pandemic = Solution and 2007 Doomed future today (this one also through Profane Existence records). Bill also runs Rodent Popsicle records, the label that have released the legendary 175 grams 7''. This is their 2009 self titled release. MSS are metallic and brutal, mid-paced, with hell of a rhythm section, amazing barking vocals somewhere between Behind Enemy Lines and Cross Stitched Eyes. Punk as nails, crusty without being exactly crust, with some ska hints here and there (thank god, in this release is so well-hidden, you propably won't even "catch" it). This album also contains some tracks from their previous releases with better sound and played a bit faster, tracks like "Get the Gun" or "Pro nature - Anti human" will make your head bang hard. Strongly political lyrics about war, capitalism or even the work-ethic. check some here.