Have you ever think why you like crust/punk and why you listened to this stuff as you growing older? Is just a kind of music that you like, is it the d-beat trend or just something else? As images of myself pumps up in my brains plasma i can say this. I love this style of music 'coz till this day it makes me wanna explode, my blood pressure goes up and my lungs feeling suffocation, i wanna scream and jump and punch things. Everytime i listen bands like Detestation, aus-rotten, Born/Dead or if we put it under a "genre" the so-called anarchist crust/punk still boils my blood. Here is the Police Bastard entrance. 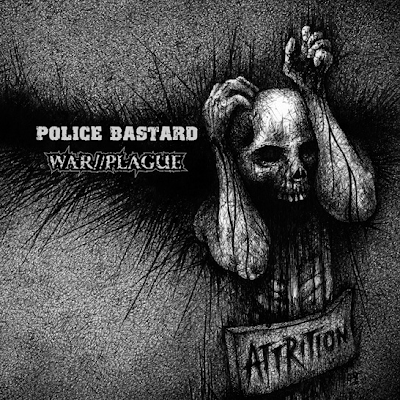 Police Bastard is a hardcore/crust band from UK with some of the oldest guys in the hardcore scene of the island. They have been in bands such as Doom, English Dogs, Sore Throat, Contempt and Filthkick (to name a few) and have been one of the best bands in my "hardcore" eyes when i first listened to their exxcellent 7'' "Gulf war syndrome". A 7'' that was dirty, heavy, with great riffs, sick to death with great vocals and i only compared it to the two graet 7'' of the swed's Crossing Chaos. Now, the new release (outta Profane Existence "making bucks from punk again") is a little bit "clean". I don't know if that's a bad think, but i expected a fucking sludgy rubbish heap come out of my speakers and i got a very good played crust punk with political lyrics (a fucking plus as always) but not so "tight and strong".
On the other hand War//Plague comes from mineapolis with members from Provoked, Pontius Pilate, Flux of Disorder, Calloused and Path of Destruction to deliver great d-beat crust the old 90's way (the good profane existence..hahahah) with a huge Amebix influence. 8/10