Some time ago, while i was chating with Dan from http://old-fast-and-loud.blogspot.com/, he told me that he will release a 7'' from a new band from Kansas city called Sucked dry. I somehow (or dumbhow) found a digital copy of that 7'' (called "falling apart at the seams'') and i was blown away. Heavy and clear bass lines played super fast, drums that makes the less of the less turns, great angry vocals and catchy riffs. You know that i love everything that combines old-school hardcore played in our time. Fresh, ultra-violent, pessimistic and strong like tornado (Βαγγουρα τσεκαρε). Does Out Cold comes in mind? It should be, 'coz this young lads delivers first-class negative hardcore like the "fathers" did. On the bottom of the post you'll find a download link. The folder contains both the new casseette and the "falling apart..." 7''.
I sent the band an e-mail and we start chating, the rest column you can call it an (extra-mini) interview (but it's not). SUCKED DRY have my respect, time for you now :

FC : Who the fuck are you?
SD: Hi, I'm nic. I'm 21 years old, I'm the guitarist and vocalist. David (drums) is 19, and Jake (bass) is 22. We've been playing bands together since we were 15-ish, but nothing of note, really. Jake and I went to elementary school together. We live in a house on the East side with 3 other guys. 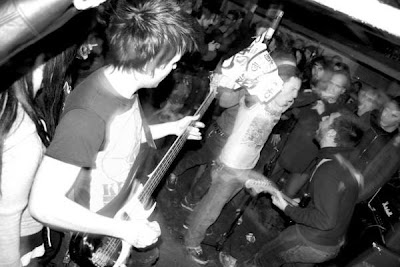 FC: What is like living on Kansas city? any notable hardcore bands i should check?
SD: Kansas City is cool. It's not different from any other smaller sized city. I think we're the 9th most dangerous city in US, but that might be a little misleading. We live in pretty serious Crip neighborhood (listen to Fat-Tone), but we've never had any problems. The neighbors are all really nice to the weirdo white kids, and this group of little girls from down the street are always hanging out with us on the porch and asking us dumb questions. We've got a lot of great hardcore bands, too: Dark Ages, Der Todesking, Sorry Excuse, Kicked In, and No Master (which Jake and David are now in doing their respective instruments after our friend Johnny passed away last year.)

FC : Are you politically active (in general)?
SD : It's hard to be really politically active in the Midwest, let alone the US in general. Political candidates don't really disclose their views or policies very earnestly, so public knowledge on the people you vote for tends to be fairly vague and murky, so needless to say, it's pretty discouraging. Plus, you know, whatever. Fuck those guys. I mean, college tuition in England gets raised a pound and people are burning buildings down, while in the US college tuition is tripling (in some cases quadrupling) the rate of inflation, and there's an immense feeling of, not necessarily apathy, but a kind of impotency. At least, I feel like there's very little I can do to change anything. 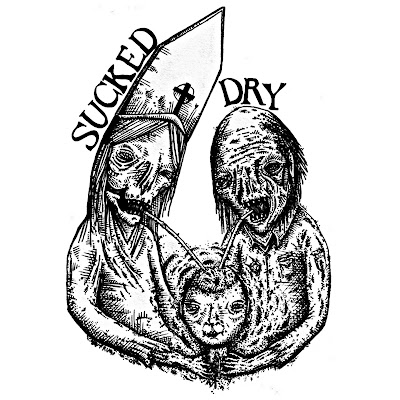 FC : Your songs are fast and mean. What's the fuel that makes you write those hateful lyrics?
SD :  The songs we write don't espouse a very specific political agenda. The lyrics are more of a reflection on what it means to be a person these days. We're all pollution producing, boot licking egomaniacs. It's almost inescapable.

FC : why are you hating the police?
SD : The boys in blue don't miss out on our dedications. ACAB

thx dude!
hook me up with your adress and ill send you a hard copy!
Dan