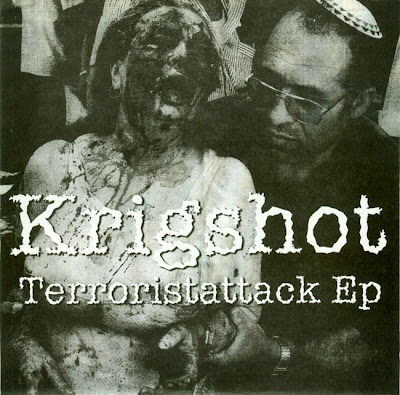 Krigshot started back in 1997 just after a call Jallo Lehto did to Anders Jakobson and asked him to start a new band  in the vein of Mob-47. To have a fully vision on who's who of these gentlemen Jallo have been playing drums for No Security, Disfear and Totalitar, as much as guitar and vocals for Meanwhile, Dischange and Kvoteringen. On the other hand Anders have been the drummer of the mighty Nasum (and as a founding member he also played bass and guitar plus yelling in their early days) and nowadays he destroys drum kits for Coldworker. So the Krigshot duo forced Mieszko (also from Nasum) to join the band so they could rehearse and record for free on his own studio. They recorded in a few hours the "Terroristattack" ep that later released by Sound Pollution records. The previous lines were a good history lesson, but what stands for it's own is the greatness of this little piece of wax. One of the greatest scandi-hardcore releases of the late 90's alongside Skitsystem's "Profithysteri" or Diskonto's "DIYanarchohardcorepunk". Simple to the bone d-beat with catchy as hell riffs and dual angry vocals. I firstly listened to this band some years ago and through their final lp "Till vilket pris..." (that i do not particularly like!) and hopefully some friend turn me on this 7'' which could be easily in some of my favorite cassettes - with the trademark sound of the exact era - with Doom, Battle of disarm, Detestation, Fleas and Lice and Hiatus. svärta och förstörelse...

great album, this is one of my favourites. hi!