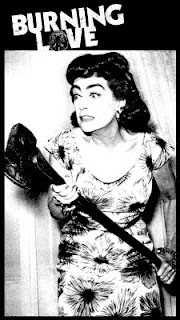 I woke up this morning and i was chatting with my good friend vas about the phenomenon band Burning Love. For those who may not know, Burning Love - the name is taken from the famous Elvis Presley song - consists of the huge Chris Colohan who has offered the hardcore / punk community some of the most hateful, clever, salty, pepper, provocative, political through personal lyrics mainly as a singer of the colossus band Cursed, and Our Father members bassist Dave O'Connor, guitarists Pat Marshall and Andrus Meret, and drummer Easton Lannaman. So, the conversation was going somehow like this:
-V: Do you know Burning Love?
-M: I'll kill you, you messing with me.
-V: Their lp shreds...
-M: Their lp is shit, is that "songs for burning lovers" name for an album? And the sound is really shitty.
-V: I'm talking about "Rotten things to say".
-M: I'll check it
Something that i never did, because when you have a certain opinion about a band and the things you like to hear in certain situations and mind conditions. So, i picked up my own copy of their first demo back from 2009 - released in a 7'' format through Deranged records - and put it on the turntable. Fuck man, "lives of the saints" what a fucking anthem , or that "alien vs. creditor" snake type of a riff, or the badass cover to Battalion of Saints (BL does not fear to do crazy covers, check "Jack the ripper" a cover of Nick Cave and the bad seeds) or everything in the end. Sound is perfectly dirty, Colohan is on top form, the band kills and i don't want to listen anything else from this band. Do yourselves a favor and buy it.

They're gonna put out a new album on Southern Lord soon .... I love this band,its refreshing to heard something more punky in a genre infused with metal wannabes and macho bullshit.

Ps - Origin Of M rips! than you