Happy new year to everyone, guys. Hope the new year will be much better than the previous one. I had a perfect anniversary evening with lots of friends, good home-style wine and tsipouro, met the guy behind crustcracker blog and slept on a floor. The previous year was in general bad, but it had the so-called highlights.

I start feeling like the official site of Crude 'coz the majority of band's album are posted here, but then...com'on : Crude! PLUS : this month i'll post only japcore albums (what an originality, ha!). 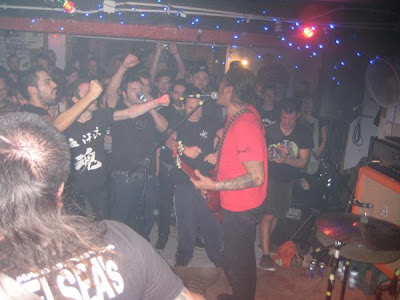 Being among the lucky elitists that saw these sharp-eyed mosters some time ago in a basement somewhere in the world, and being impressed from the shinning smiles of the japanese guys (great for a band that the only english were "ok", "yes", etc) i thought that you might want to listen this album before you buy it.

Here you'll get no fancy, car-stereo, diamond-sound album. The album is recorded on a four-track and i must admit that i was a little bit sour with the sound 'coz you can't listen clear enough neither the bass lines, nor the guitars. After 10 times, i finally believe that the guys do the right thing. The know that these tracks have not the quality of "Attitude" lp so they accomplished to have a dirty and raw sound so the recording to be more "dog-bitting". If you expect some familiar poser-friendly solos or the usual epic Crude guitars you can skip this post 'coz it will led you down for sure. On the other hand here we have CRUDE.

I love the sound of this record! More punk than any of the previous CRUDE stuffs, but it's all killer.

Great shit here...I'm gonna lose some hours for sure. Trading links is good, trading US tapes for Greek tapes is even better...(hint hint).
Cheers - Robert

hey robert, i can say that i wasn't so impressed by this album as i was been from the rest crude album's. overall is a good album and i like the sound, even if i would prefer that "epic crude parts"

I liked this 12" anyway check out Worms meat 7'' on my blogs,its something for you :D

chuck norris is the legend, and my legend.

link is up again, cheers