This is another fucked-up day. Everything goes from shit to more shit, nerves are in "red allert", mind is bleeding from tediousness and boredom.
I don't know, it's just the spring or i'm getting old before my time?
As i had to go out to make a walk to calm down, i'm loading in my mp3-player some good (or not so-good) demos to hear. One of them i wanna share with you guys. 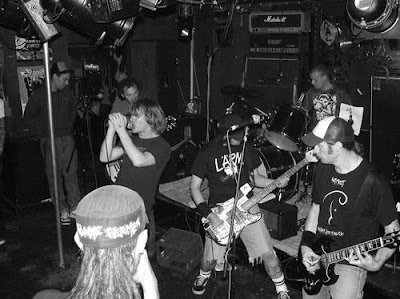 Constant state of Terror are a DIY hardcore band from Brighton, uk. This demo has been recorded in november of 2005 and released in 2006. The band has formed in 2004 so the tracks included are the "first" band's attempt. Heavy political hardcore crust as the uk produces over the years. Solid drums, heavy bass, guitars schissoring and angry, clear vocals by members of Substandard, Vulcan death grip, MTA, Combat shock and Seven arrows in your bastard heart. Mid-temo to a little bit faster d-beat with great riffs. A mixture of Antisect, amebix, discharge and the likes. Black, black, black fellings by old-school crusties.

I have included a text with the lyrics so you can judge for your own, but as a political uk crust band you'll get topics as personal relationships, the war on terror or the war in general, fucking work and the rest. You should defenetely look at the lyrics, they deserve your time. Plus they gonna release a full-lenght lp some day soon, as they have released a 7'' called "Liberation" On Inflammable Material Records and Squawk Records.
Contact the band also through this email : jules@mtpfight.fsnet.co.uk

That's all folks, just for now, fuck the bad vibes and listen some good crust.

thanks, ill check it out.

i'll work it out nico