Another great mini-cd that came ten years ago in my mailbox, in the golden ages of tape-trading. Kafka born in genova in 1995 as a melodic hardcore punk band but quickly changed their sound and their influences to more metallic edge paths. They were a straight-edge band, that everyone that have seen them live back in the day in villa amalias have only good words to say.

To understand their sound better, think Blackfish records sound, yep Ian Glasper's label with that early 00's good metallic-hardcore releases. In this mini cd the band have clear influences from the NYHC scene with all that great mid-tempo parts that turns out the delight soundtrack of a violent mosh-pit. Their guitar riffs make clear that the band loves Slayer, especially on the opening riff of Generaziona di stupidita. 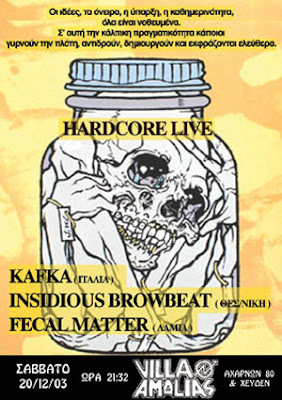 Add some really screaming low-edged vocals and Kafka turns into the ultra-chaotic hardcore band in my ears, or it's just that when i buyed that disc i was only 15, so the band sounded to me really extreme, but then i still enjoy this shit. One is for sure, Kafka alongside Frammenti, have very igh standards for the italian hardcore of the late 90's. Two bands worth checking out. Last but not least : "If Biohazard didn't play for money and were from italy their name would propably be Kafka." and "The perfect impact is of course live, with a high shrill voice over a chaotic metallic background that blows anything up.".

yeah kafka and frammenti were awesome and among my favourite bands, but if you're looking for some more bad ass italian 90s hc, check out these tunes

[by all means - fino a qui tutto bene]
http://www.megaupload.com/?d=KSIR2PS8