I woke up this morning with the tunes of this great canadian band ringing in my ears, so i give you some good old surfing punk rock. And that's coz i can't post again Rajahtaa's demo cd-r.
While i was searching some new bands on the web i came across a very good radio-show from canada, called equalizing-x-distort, where the guy behind the mic played all the tracks from the fucking rajahtaa demo. At last some greek band gets some notice outside greece. In his "show" i saw that he posted a band called The Fallout and i got a flash-back "somehow i know that bastards'. So, getting my head clear i remembered that this band is the same one with the band that have been impressed me a while back. They have been part of two cd-r(s) the magazine Profane Existence gave with the mag. Tracks like "peace, love, anarcgy" and "compassion over killing" made me dance on my bedroom like i am a 15 years old boy that now comes across - for first time - with bands like the Adverts, dead kennedys, Magazine or Blitz. Yep, Fallout combines all the great melodic parts of the early uk punk bands with very good - to the point - lyrics and some hints of modern us punk rock (reminds occasionaly anti-flag or pennywise but in a good way - trust me). This album was released back in 2007 and i think it's their fourth full lenght and their final release. Yeah this is punk-rock to the bone and this is my new week's soundtrack. 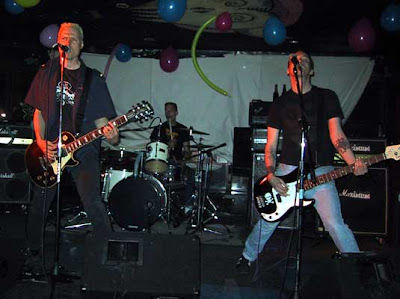 p.s. i got some goodies from the 7inchcrust mastermind and i'll post'em in the next few days. cheers on...
Posted by mikxxx at 13:43