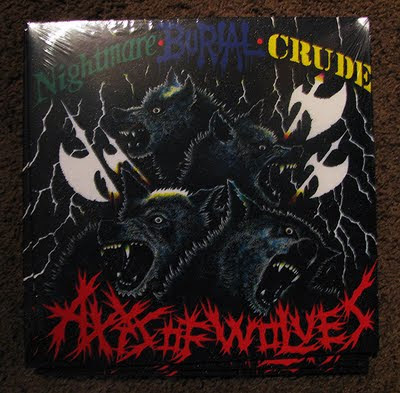 I think, you already know who the fuck these japcorers are, so i'll keep it simple.
Nightmare hails from osaka and it's propably the longest act from japan. Started in 1988 they have released a bunch of records, seveninches and splits and they have been part of the famous "Eye of the thrash guerilla" compilation Lp. Here they participate two ugly, noisy, long and fast as fuck tracks of pure raging japanese hardcore. If you like the first releases of nightmare (and not the shitty lp scaterraw) this will shake your body really bad.
Next in line, my favourites german japunks (or japanese germ-punks?) from hagen, germany. You may be aware of the unleashing power of Burial's tank, but for those that don't, this is by far the best japcore band around the globe nowadays. They have released two lp's, two seveninches (get them here), and a split 7'' with athen's finest Antimob (get it here). Also, they have toured constantly including in their tours isolated places such as greece and japan, or not so isolated like northern europe.
Here you'll get two awesome in your face anthems, with the sound to be similar with their first 7inch. Forward, forward, forward....
Last on the bill, Hakodate's Crude. They started back in the mid 90's and they made a bunch of releases also. Full lenghts, splits and the list goes on and on... If you visit this blog frequently you already know that crude is the sword to chop some stupid heads off. Enjoy responsibly their previous posts here and here.
The vinyl version released as an one-sided, gatefold lp from hate records and the cd version by HG : fact records from japan, so if the economical crisis hasn't affect you yet, go and buy it...
This release came out to support the japanese tour these three bands did in 2007.
Thanx to dbill for this one, once again. cheers, mate.

I'll start this off with one and only statement...this split LP is worth buying (or downloading) for the Burial tracks alone...they fucking rip you to pieces. I have said before that Burial is one of the few bands who constantly evolve their, and true to their game they add a heavy dose of thrashing to their equally heavy rocking...rocking and thrashing actually sums up what this band does on this LP. Bare in mind that these tracks were recorded after the ''Hungry Wolves'' 7'' and before the ''Speed at Night'' LP, with Norman from Bombenalarm as the guitarist (the bald jazz cutie they toured greece with the second time)...Eternal Excess might be my favorite track......addictive shit.

Packed in this piece of frozen petrolium is the monstrous Nightmare, and the epic Crude. If you are into total noise attack then you will fall in love with Nightmares sound. Raw as fuck production topped with nonstop screaming...I'm not the biggest fan of Nightmare, but their audio violence is well appreciated. Crude on the other hand are one of my favorite bands...the epic guitar leads, the catchy riffs, and the great song structures...though they are really held back on this recording mostly due to the really bad recording...''Attitude'' or ''1999'' LP's would be a much better introduction for you to this Jap monster...the songs on this split were later re-recorded with much better production, and re-released on Jannick's Feral Ward label as a 7''.

Last but not least the artwork is done by the huge Sugi, while the gatefold LP has a beatifull collage of pictures from the Nightmare-Burial-Crude ''Axis of Nightmare'' japanese tour, which will make you grateful you aren't as fucked up as Fabian...in your face Fabsie!!!!!!