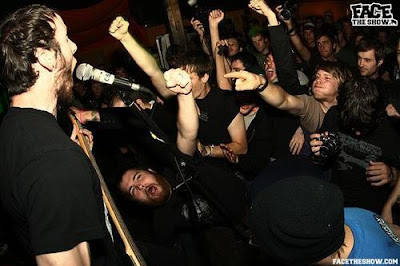 Perth express was a hardcore band from germany, and was playing an unbelievable combination of hardcore, crust and metal. To make you understand it a little bit easier think that we have a mixer and we want to cook some "Perth express" vegan recipe... we'll take a lot of tragedy, a lot of his hero is gone, some metallic elements mainly in the production to make it heavy and solid as a fist, a little bit outta kylesa just for the fragrance and finally instead of (as)sa(u)lt, some mastodon (μη ξυνιζεις τη μουρη, μορε - i can't translate it... if anyone could...) for levant flavour.. hehehe... Have a nice appetite...
Now, that perth express disbanded a guy from them alongside some guys from trainwreck, etc. created the band Glasses (i'll post their first 12'' tomorrow first thing in the moning...)
And as fashionable activism blog wrote about them : Without any exaggeration I can say this is without a doubt one of the most powerful and memorable metal/hardcore records released in the last decade...